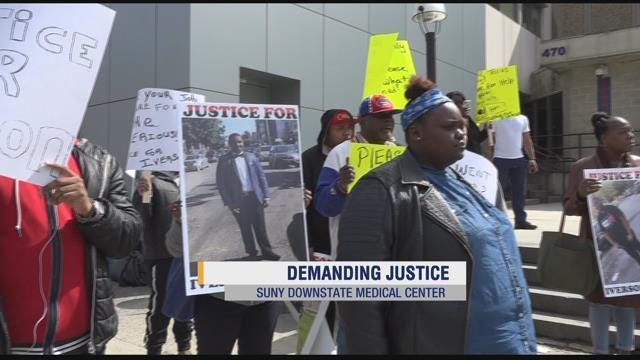 An East Flatbush family is planning to sue SUNY Downstate Medical Center for negligence over the death of a 15-year-old boy.
Iverson Bryce was admitted to the hospital last week after complaining of chest pains.
Bryce's sister, Regina Mickens, says her brother coughed up blood in a tissue and was told he just had a dry throat and to get a humidifier.
Discharge papers provided by his family show a muscle strain as the diagnosis given by the hospital.
A doctor cleared Bryce to return to school the next day, but Mickens claims he woke up feeling worse and an ambulance had to rush him to the emergency room.
"The last words that he said to me was like, he was like 'I'm dying, I'm dying,'" Mickens said.
Family and friends said they'd be rallying outside the medical center for hours to demand justice for the 15-year-old.
"We'll be obtaining all the medical records from this hospital and then we will seek answers from anyone at the hospital that's willing to talk with us about what happened to Iverson," said Edward Steinberg, a lawyer for the victim's family.
The medical examiner's office says it’s still investigating how Bryce died.
A spokesperson with SUNY Downstate Medical Center says they can't comment on any pending or open litigations.
Related Stories
Jun 07, 2016