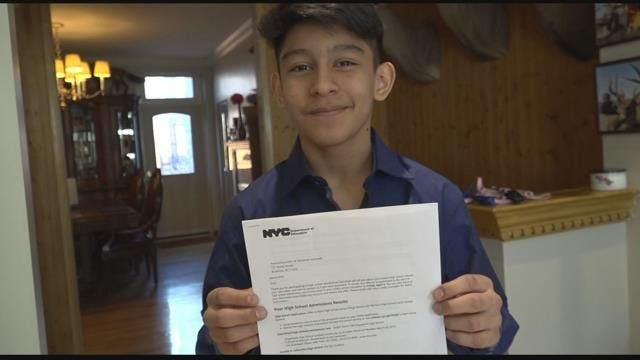 A 13-year-old Latino student got a golden ticket recently by being accepted to his top school.
Sebastian Acevedo was accepted to Stuyvesant High School, one of eight schools to admit students solely on their specialized high school admission test score, or SHSAT.
“Once I opened the letter, I remember I literally just yelled and just started walking around the room in circles,” says Acevedo.
Acevedo's mother says she wanted to give him a fair chance and so they had to invest. She says she is proud, but not blind to how aggressive preparation was to get into a school like Stuyvesant.

"The system is not broken in seventh and eighth grade. We’re talking about kindergarten, first grade, second grade – that’s where the problems start. We need to create workshops for parents where they will get informed about what is ahead,” she says.

Stuyvesant is a school where only seven black and 33 Latino students were accepted. Overall, Asian students maintain the greatest numbers in specialized high schools acceptance.

“Here we have an opportunity where students can study for an exam and perform on that exam,” says Frances Kweller, director of Kweller Test Prep.
Mayor Bill de Blasio has said he wants to abolish the test entirely and save those spots for the top seven percent of students at every city middle school.

While specialized high school acceptances came out just a few days ago, round two admission results come out in May.