Despite COVID spike, Gov. Lamont doubles down on in-person classes

By: News 12 Staff
In spite of another record COVID-19 infection rate of almost 24 percent, Gov. Ned Lamont rebuffed calls to return to remote learning on Tuesday.
Instead, the state sent 620,000 rapid tests to schools across Connecticut.
MORE: Where to pick up at-home tests issued by Connecticut health officials
The move isn't enough to calm some students' fears.
"Nobody wants to get COVID. It's rising and rising and rising, but they're not doing anything about it," said Norwalk High School senior Will Davis.
As of now, schools can offer remote learning, but it won't count toward the state's 180-day school calendar requirement — except under limited circumstances, like if a student is quarantined because of COVID.
Thousands of parents have signed an online petition asking Lamont to expand remote learning. The group is also planning a rally outside the Governor's Residence in Hartford on Friday.
"I understand people want to err on the side of hesitancy a little bit, but we've had millions of tests," he said.
In addition to expanded testing, the state is also out with new guidance to cut down on absences.
If a student or teacher has symptoms but tests negative, they can come back to school 24 hours after their last fever. If they're positive, they have to stay home at least five days.
If someone is exposed, the rules are more complicated. The person can stay in school if they're fully vaccinated, but they will need to test after five days. If they aren't fully vaccinated, they have to quarantine at home.
"We overall weighed the risk-benefit to say that the risk of developing COVID was small enough in a vaccinated person, and the benefits of being in school were important enough," said Connecticut Public Health Commissioner Dr. Manisha Juthani.
Some schools are closing because they don't have enough teachers and bus drivers, but the state education commissioner insists the situation is under control.
"They right now seem to be doing OK. We've been able to provide substitutes for the schools that are, you know, are in contract with them," said Education Commissioner Charlene Russell-Tucker.
On Tuesday, the federal government agreed to temporarily waive some Commercial Drivers License requirements to get more school bus drivers on the road.
At Norwalk High School, some students say they feel safe being back at school.
"Yeah, because I have a mask on. And...even though people take the mask off in the hallways. But I still have mine on," said freshman Yaisana Hassan.
Experts say medical-grade N-95 masks work better than other versions, but there are no plans to hand them out at Connecticut schools. 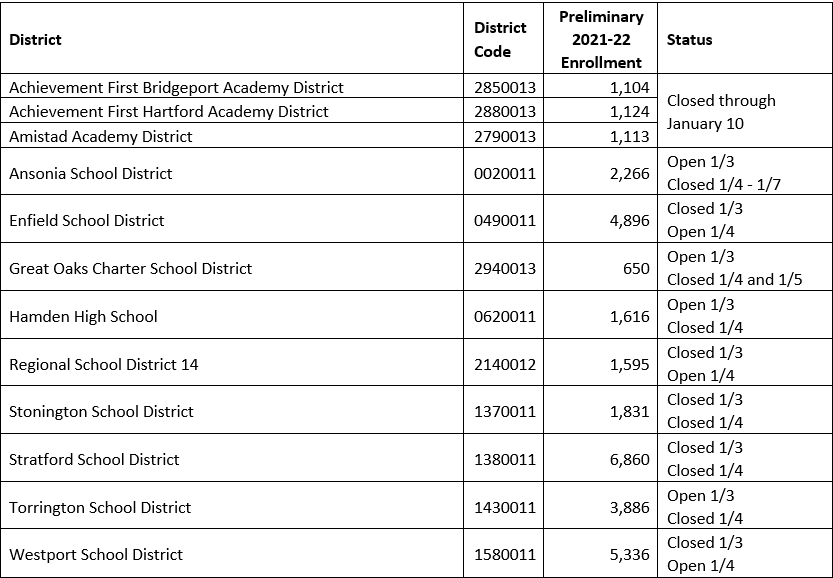 Thomas Hooker School in Bridgeport closed due to coil burst